A Guildhawk Company. Discover more at www.guildhawk.com
Home 100 Years On – Remembering the Brave Women Who Fought for Equality

On this day 100 years ago, the British Parliament passed the Representation of the People Act 1918, granting women over 30 who owned property, or were married to a man on the electoral register, the right to vote in elections. A compromise compared with the full enfranchisement of women that many had hoped and campaigned for, but an immensely important concession nonetheless. A hard-fought, fundamental first step towards later acts of parliament that would involve all in the country’s political process.

Women would eventually gain the right to vote on equal terms with men in Britain as a result of the Representation of the People (Equal Franchise) Act 1928. Other British milestones include the Law of Property Act 1922 (which meant women could inherit and sell property on the same terms as men) and the Equal Pay Act of 1970.

None of this would be possible without the countless women from around the world who campaigned, protested, and petitioned for their voices to be heard.

Though the laws that gave women the vote were specific to each country, the movement to secure that right was international. Founded in 1904, International Woman Suffrage Alliance united people across barriers of language and culture to fight for a common ideal. It continues to this day as the International Alliance of Women, fighting for women’s empowerment and development.

And so, on this special anniversary, it is important to commemorate the remarkable women who had the courage and dedication to challenge the male-dominated establishment, demanding equality, voting rights and better opportunities. 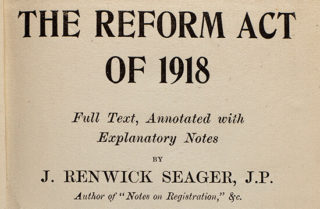 Today should be a day of celebration, but not one of contentment. The battle for equality is not yet won; remnants of the male-dominated society they fought against still exist, both subtle and blatant, both at home and around the world.

It took until Marjorie Scardino in 1997 for a woman to become the CEO of one of Britain’s major companies. By 2016, there were still more men named David at the top of FTSE100 companies than there were women.

Despite exceptional female leaders such as Elizabeth II and Margaret Thatcher, only 30% of current British politicians are women.

Let this day, then, and the memory of those women instil in us the commitment to fight the battles which still need to be fought on behalf of women around the world.