We have a new name and a story to better reflect our heritage and our plans for the future. Please visit our new website www.guildhawk.com
Home 4MLD: Measures to Identify Fraud in Foreign Language Documents

Regulated professionals need to be especially diligent when reviewing documents from clients that are in foreign languages following the new anti-money-laundering (AML) rules that came into force on 26th June according to David Clarke, the former head of the UK National Fraud Intelligence Bureau (NFIB). David is encouraging firms to review their controls for checking the veracity of foreign language documents that a customer presents for due diligence purposes and says, “Criminals who launder money need to hide the true source of their wealth when they engage a professional. They do this by lying and presenting documents that are false, stolen or contain information that has been deliberately mistranslated.”

There are cases where information missed in translation has caused big headaches for individuals as Mr Jacques de Groote, former director of the IMF and CEO of the World Bank found to his cost. 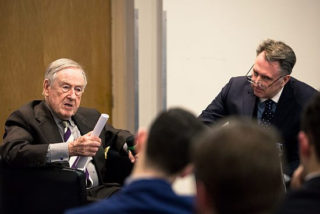 To avoid this, David says firms should have an effective process in place in place to check information in foreign language documents using the skills of in-house staff with language skills or qualified linguists using the AMLiss™ approach to document review and certification.

The 106 pages of the Money Laundering, Terrorist Financing and Transfer of Funds (Information on the Payer) Regulations 2017 (the regulations) are part the EU 4th Anti-Money Laundering Directive (4 MLD). They are designed to tackle the serious threat from terrorists, organised criminals and corrupt officials who seek to launder illegal cash and electronic money through the UK financial system.

Concealing the Source of Wealth

In the past, corrupt officials like James Ibori, the former governor of Nigeria’s Delta State who embezzled an estimated $250 million USD from the Nigerian people, circumvented AML procedures across the globe. In the UK, Ibori succeeded in making his stolen millions look legitimate by washing them through offshore companies and bank accounts. He then embarked on a spending spree with lavish homes in London, Houston and South Africa. His bounty included a private jet, luxury cars, fleet of armoured Range Rovers and a Mercedes-Benz Mayback that he bought for 407,000 Euros and was shipped direct to his mansion in South Africa.

Ibori was eventually identified and brought to justice by London’s Metropolitan Police and in 2010, he was sentenced to 13 years in prison after pleading guilty to 10 counts of money laundering. His wife, sister, lawyer, fiduciary agent and a corporate financier have also been convicted of money laundering following his conviction.

Global Witness, the anti-corruption body was critical of the ease with which Ibori and his associates were able to conceal the true source of his wealth and called for a thorough investigation into the situation.

A subsequent a review of British banks in 2011 by the UK Financial Services Authority (FSA), revealed serious weaknesses in the AML controls at many British banks with some banks apparently ‘unwilling to turn away, or exit, very profitable business relationships when there appeared to be an unacceptable risk of handling the proceeds of crime’.

More than a third of the banks visited failed to put in place effective measures to identify customers who were classed as Politically Exposed Persons (PEPs) and their family members; these are individuals who are or have been entrusted with prominent public functions like James Ibori and his family. The review found that in some cases, banks ‘failed to identify customers as PEPs even when it was obvious from the information they held that individuals were holding or had held senior public positions’.

Tackling the Threat to the UK

Money that finances the lifestyles and actions of terrorists and corrupt individuals is a serious threat to both the countries they pillage and the UK. According to Stephen Barclay, economic secretary to the Treasury, “Terrorist financing and money laundering are a significant threat to our national security, and we are determined to make the UK a hostile environment for illicit finance.”

The UK law now requires credit and financial institutions, lawyers, accountants, real estate agents, high value goods dealers, casinos, and auction platforms carrying out business in the UK, to conduct far more stringent checks to prevent money laundering. There are new definitions such as the meaning of a ‘business relationship’, which has implications for estate agents who are treated as entering into a business relationship with a purchaser as well with as a seller.

To improve transparency of company ownership, corporations must now provide the government with current information on their ultimate beneficial owner which is to be compiled in a register, accessible to law firms and banks. There is an end to the automatic exemption to carrying out enhanced customer due diligence in certain circumstances which will impact on UK pension schemes and others that now have to apply for exemption.
There is also additional scrutiny of those individuals who may be politically exposed with enhanced due diligence measures now extended beyond foreign figures to embrace those in the UK. The requirement for customers to produce identification when trading goods in cash and at casinos has also been tightened through lower thresholds.

The Cost of Multilingual Compliance

Rules designed to deter criminals from abusing institutions in the UK are not intended to obstruct legitimate business. It is reassuring therefore to see that recent research by LexisNexis Risk Solutions showed there to be broad support for measures introduced in the UK to improve the conduct and accountability of financial firms, with 61% of those surveyed viewing the Senior Managers Regime (SMR) as a positive change.

However, research carried out in 2016 on behalf of the FCA found that the cost of compliance and AML risks associated with doing business with some individuals is such that ‘banks are withdrawing or failing to offer banking facilities to customers in greater volumes than before. There is a perception that this is driven by banks’ concerns about the money laundering and terrorist financing risks posed by certain types of customer’.

The cost and technical challenges of conducting ongoing enhanced due diligence can increase when a client or their agent is communicating in another language and crucial documentation they have supplied as part of the Know Your Customer (KYC) process are in an unfamiliar language.

This situation presents a particular risk and as Andrew Massey, the former head of the City of London Police’s Overseas Anti-Corruption Unit has said, “Due diligence, particularly within overseas legal and financial operations, must extend to what can be evaded through language”.

It is essential to understand the contents and context within a foreign document, be it a name, address or details of the beneficial ownership of a company in order to conduct due diligence. Similarly, it is imperative that any apparent errors and anomalies are identified and addressed. The value of in-house staff with the linguistic skills to communicate with customers and understand the documents they produce cannot be understated and was the subject of technical briefing in Vilnius in 2016.

When no linguistic expertise is available across the organisation, an alternative procedure should be applied to understand the content of foreign language documents and elicit the information required to conduct an appropriate risk assessment. Putting the document into Google translate may seem like an option but as Common Sense Advisory’s Don DePalma writes, in these circumstances “employees and your suppliers are unconsciously conspiring to broadcast your confidential information, trade secrets, and intellectual property (IP) to the world.”

It is unlikely that a client supplying confidential information would consent to their data being shared via Google Translate and in 2018, this form of unintended data breach, could land an organisation with a significant fine under the Global Data Protection Regulations (GDPR) that comes into force next May.

A more secure and reliable alternative is to have the document translated by a qualified professional linguist who is vetted and can be trusted with the confidential information. The new regulations in respect of enhanced customer due diligence make provision for one or more of the following measures including:

Translation of material and multilingual online research by an independent, reliable source can be achieved quickly and for a modest fee. However, costs can quickly rise when multiple websites have to be searched or large documents such as articles of association and leases have to be translated to complete a risk assessment or conduct ongoing due diligence. This level of investment in professional translation may be merited in certain circumstances such as where a customer has provided false documentation or there is a high risk of money laundering or terrorist financing and enhanced due diligence is obligatory.

In situations where the level of risk is assessed to be low, there are two alternative options to mitigate the risk of not identifying important information contained in foreign language documents and translated material. These are the Anti-Money Laundering information support solution (AMLiss™) and the Lease Abstraction Translation Service. The features of the two are similar with a qualified mother-tongue linguist reading a given document, identifying key information required for due diligence purposes, such as names and company details then extracting and translating the text. The translation is then certified and returned to the client. Other services include conducting online multilingual research to corroborate information or explore anomalies that inform risk assessments. 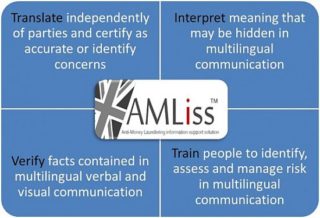 To ensure security, confidentiality and compliance with GDPR is maintained, the processes follow strict controls and are certified to conform with international standards ISO9001:2015 for Quality and ISO27001:2013. These externally audited to provide independent evidence of compliance. Among the controls in place are secure data storage and transfer, staff training and vetting, and use of specialist linguists including military veterans, and experienced lawyers and comprehensive insurance cover.

Mergers, Tenders and Multilingual Due Diligence

The policies and procedures for multilingual due diligence checks designed to identify issues that may present the risk of terrorist financing and money laundering can also be applied to protect a business that is engaged in a merger or acquisition and international tendering. Understanding precisely who you are dealing with and what is being communicated is especially important when tendering through an overseas agent.

The volume of documents, emails and other material generated during a major tender is immense and the risks of something going wrong that exposes the bidder to allegations of fraud and corruption are heightened when controls are weak. This was illustrated recently in the catastrophic case of corruption involving intermediaries at Rolls Royce PLC where the absence of adequate procedures to prevent bribery cost the historic company £497.25m to settle and tarnished its reputation.. The individuals concerned remain under investigation by the Serious Fraud Office.

The Rolls Royce case addressed twelve admissions of wrongdoing in seven jurisdictions dating back as far as 1989, and highlights the global nature criminality and the manner in which some individuals in positions of trust believed they could hide their criminality. In the case of Counts 5 and 6, Rolls Royce admitted the offences of false accounting and conspiracy to corrupt. These were in respect of submitting documents to the Indian Government that contained false information and paying an intermediary to retrieve a document that listed the intermediaries and was being investigated by the authorities. Some people at the company clearly believed this illegal conduct during the tender process could be concealed forever.
Actions and documents that could once be hidden from the preying eyes of stakeholders and officials are far more difficult to bury in the digital, globally connected, social media world. Today the focus is rightly on compliance with the law, using the best information to make risk based decisions and keeping records. Today, the wise compliance officer ensures nothing is hidden in translation and keeps records to prove it.

Ian Miller MBE is the Chairman of Today Translations amd Today Advisory Services. He has served on Boards of global firms in the UK and USA and has over 30 years’ experience in dealing with mergers and acquisitions across a range of regions and industries.