A Guildhawk Company. Discover more at www.guildhawk.com
Home A Very British Reaction To The Attacks

Inundated with messages of good will, Today Translations in London decided to ask 840 of their linguists from 56 different countries to tell words that best described the reaction of the British public on the aftermath of the London bombings.

‘Calm’ (with 16 per cent of the responses), ‘Compassionate’ (10 per cent) and ‘Shocked’ (8.4 per cent) topped the list, with many linguists highlighting they were especially surprised by the maturity and the fraternal attitude of most Londoners.

“Before, during and especially after the tragedy, people were out there enjoying each minute of life no matter what. They are getting on with their lives and that is definitely a victory,” mentioned a French translator. Linguists from Italy (17 replies), France (16) and Poland (10) topped the list of those who considered Londoners’ reaction had been rather calm. 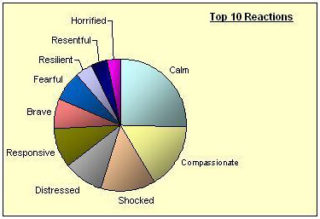 “We saw no panic in the country, but rather a civilised approach to the investigation of the attacks. I was particularly impressed with people offering lifts to those who couldn’t reach home because of the public transport suspension,” referred a Moldovan linguist living in London.

The reaction of the emergency services and the police has also been highly lauded by the respondents, with 6 per cent saying that ‘responsive’ was the word that best mirrored Londoners’ behaviour.

“It is well known that the Police and the citizens were waiting for this kind of terror. They were psychologically prepared for it. The police had put procedures in place and people knew what they had to do in case of terror attacks. Also, the emergency services had been very effective,” mentioned another French linguist.

‘Resentful’ (20 replies) and ‘Angry’ (16 replies) were the top negative reactions spotted by the respondents, with some mentioning that the public perception of the Muslim community’s conduct has been “negatively exaggerated”.

Jurga Zilinskiene, Managing Director of Today Translations, responsible for the production of the survey commented: “On the following day to the incidents, we received an impressive amount of messages from our linguists expressing their views on the events. Translation is something far deeper than words ‘ it’s about understanding mood, emotion, ideas and culture. No two societies are the same and this can be most apparent at times of crisis. I think the views expressed by our linguistic colleagues across the globe say a lot about the culture in Britain and we should be very proud of that”.