What is meaning? And moreover, what does it mean to mean something? Such conundrums are grist to the mill for philosophers of language, but getting to the ultimate truth has always seemed a distant prospect. However, a step forward on that last question has been made with the help of state-of-the-art neurolinguistic research.

A team of scientists at the University of California, Berkeley has created an ‘atlas of the brain’ which maps how semantic word classes group together in different cerebral regions. The result of the database is an interactive visual model which highlights in technicolour the extensive network of connections between individual concepts that exists in our brains. This represents a breakthrough in the collaboration between neurology and semantics, the branch of linguistics concerned with the study of meaning.

We typically associate different areas of the brain with certain linguistic capabilities, such as Wernicke’s area, Broca’s area. Injuries to these two are linked with two different kinds of aphasia (or speech loss). However, researchers were surprised to see the extended spread of linguistic activity across both hemispheres.

Working with seven different test subjects, the scientists used Functional Magnetic Resonance Imaging (fMRI) to measure the cerebral activity resulting from bloodflow to the brain, while the subjects listened to roughly two hours each of narrative stories read aloud on The Moth Radio Hour, a radio show in the USA. Over that time, each subject would have been exposed to an average of 25,000 individual word tokens and over 3,000 different word types. The researchers subsequently transcribed these same stories, and matched the transcripts with the brain activity data to represent the network which they superimposed on a 3D model of the brain. It represents which areas respond when we hear different words, and the degree of reliability of this reaction. They were then able to colour code the meanings into consistent groups. For example, social words activated the regions highlighted in red, while numbers activated those marked by dark green. 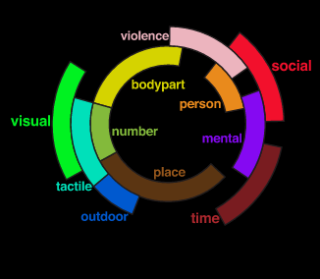 For instance, this tiny area of the right hemisphere shown above was consistently linked by speakers with social words like ‘husband’, ‘wife’, ‘aunt’, and ‘pregnant’. Darker red and brown areas are also predicted to link to words of time and place. 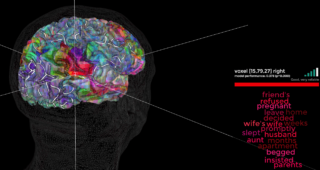 This one below showed areal correlations with ‘woods’, ‘walking’, ‘riding’, ‘mountains’ and ‘climbing’. 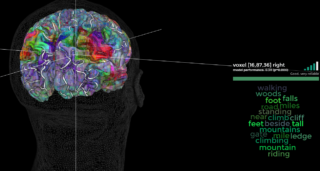 There was another, important, kind of consistency at play here too – the seven subjects all displayed remarkably similar semantic maps, which reassured the researchers that the results were not idiosyncratic, and might actually represent something fundamental about how the English-speaking mind is organised.

Importantly, one word does not correspond to one location in the brain. A flare up of neural activity in one region upon reception of a word does not mean that the word form is ‘housed’ in that one location. This is because of polysemy – the capacity for a single sign to have multiple referents.

For instance, in English, the word ‘top’ is highly polysemous. ‘Top’ correlates in one section of the brain with words related to clothing (‘a sports top’), while appearing in another area in relation to numbers and quantities (‘top of the league ‘), and in yet another can be about places and locations ‘on top of the table’).

Another interesting feature is that many of the word groups are hidden within the ‘folds’ of the brain’s structure, so the researchers added a function to help us access them, by allowing you to ‘inflate’ the brain like a balloon or flatten it out as a visual aid. 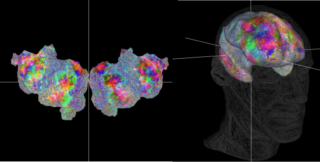 This study is not just a matter of academia for its own sake, as development of this technology could lead to life-changing uses for many people. Initial speculation has suggested that it could be used to decode in real-time what words a person is hearing, reading or thinking about – which of course would come with enormous ethical implications. However, it could also be transformative for those suffering in silence with conditions such as motor-neurone disease or locked-in syndrome.

While this study has been hailed from all corners as a methodological tour de force, we can still expect greater things to come from it. For a start, the database was compiled with only seven subjects, of whom five were men and two were women. Moreover, they were all native English speakers. This can only make us wonder what the brain atlases for native speakers of Portuguese, Romanian, Cantonese or Malay would look like – that is when this becomes truly fascinating for those in the translation industry. Debates over whether or not the language you speak affects the way you perceive the world, such as that over the Sapir-Whorf Hypothesis, are some of the most hackneyed topics in discussions about language – and often feel totally insoluble. However, an expansion of this fascinating neurolinguistic research could offer the ideal platform to elucidate such claims, or to refute them once and for all.

And best of all, the research is open source, so click here to explore the inner workings of your mind…