Last month, Today Translation’s David Clarke was a guest speaker at “Cyber Essentials” – the UK government scheme to improve security against “cyber attacks”. By “cyber men” presumably. Who live in “cyberspace”. Wherever that is”

The whole “cyber” thing is an example of an idea running riot with language. “Cyber” derives from “cybernetics”, the academic study of issues of organisation and the management of patterns that connect and regulate systems. It comes from the ancient Greek “kybernetes” which means “a pilot” or “a steersman”. Dante’s Charon, who ferried the souls of the newly deceased across the river Styx which divided the world of the living from the world of the dead, was a kybernetes. A good guy then, not a baddie. 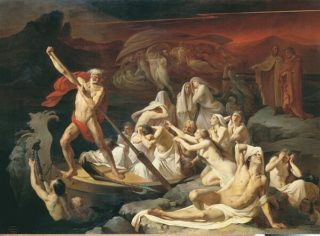 “Bows and Arrers against the Lightning”

When a Greek noun became an English adjective it spawned a host of bastard siblings who all live on the dark side of language – “cyberspace”, “cyber attacks”, “cyber men”, “cyber security” “cyborgs” and now, “Cyber Essentials”, all of which have a strong whiff of H.G. Wells’s “War of the Worlds”.

(Read the following in your best inner Richard Burton voice)

“No one would have believed, in the last years of the nineteenth century, that human affairs were being watched from the timeless worlds of space. No one could have dreamed we were being scrutinized, as someone with a microscope studies creatures that swarm and multiply in a drop of water. Few men even considered the possibility of life on other planets and yet, across the gulf of space, minds immeasurably superior to ours regarded this Earth with envious eyes, and slowly and surely, they drew their plans against us.”

That the threat of invasion by dark forces intent on destroying the ways of the world as we have come to know them is indisputable and the steps which are being taken by David and others to thwart the threat are essential. But, please can we stop using language and iconography which belongs to the world of science fiction? Surely simple phrases such as “data security” or “internet resilience”, or notions such as “anti-hacking” or “data-protection”, which whilst being slightly dull, are more accurate than the literary romance of Isaac Asimov and Ray Bradbury. There is no reason why something which is so important but intrinsically so difficult to describe in lay terms should be surrendered to a narrative theme worthy of an episode of Dr. Who. Let’s abandon “cyber” this and “cyber” that and attend to the essential task.