We have a new name and a story to better reflect our heritage and our plans for the future. Please visit our new website www.guildhawk.com
Home David Cameron’s plan to pop the dirty money housing bubble is a good investment

James Ibori, the former petty thief who became governor of Delta state in Nigeria and one of the country’s richest men, is estimated to have stolen over $250m of Nigerian public funds. He laundered swathes of his ill-gotten gains through London before he was prosecuted in the UK and sent to jail for 13 years in 2012.

Before his incarceration, Ibori enjoyed the highlife. He had huge sums of illicit money to blow and spent it on living the luxury lifestyle with a private jet and expensive houses in London. The full extent of his extravagance may never be known despite the best efforts of the Scotland Yard’s finest financial investigators. This is because finding dirty money is a challenge, especially when beneficial ownership of assets such as residential and commercial property can be hidden behind anonymous ‘shell companies’ or held by a network of offshore companies.

Over 100,000 UK property titles are registered to overseas companies, with over 36,000 properties in London owned by offshore companies. The value of properties owned by offshore firms is estimated to be about £122bn. Donald Toon, Director of the National Crime Agency believes the London housing market is being used by foreign criminals to launder billions of pounds and this is inflating house prices for domestic buyers.

London’s dirty money housing bubble is clearly very bad for honest citizens trying to get onto the housing market. However, their hardship is nothing compared to the catastrophic consequences for the millions of impoverished victims whose funds are converted into luxuries for the benefit of a few; and this is bad for every one of us.

The state funds that Ibori looted, like the billions of dollars stolen by other corrupt officials such as Nigeria’s dictator Sani Abacha and Ukraine’s former minister Pavlo Lazarenko were intended to improve the lives of citizens in those countries. When money earmarked to build a hospital in a grief stricken town are used to buy an extravagant house in London or Los Angeles it is easy to see how those who see and experience suffering as a result feel a sense of injustice. Left unaddressed, that feeling turns to anger, which in turn leads to violence in those countries and ultimately generates ill-feeling towards Britain and her citizens.

James Ibori’s case sent a clear message to corrupt officials but this was a rare prosecution for money laundering and is now consigned to the history books. Last year, Donald Toon warned City law firms that he was on the look-out for money laundering and now Prime Minister Cameron has confirmed the UK is going to toughen up on company rules that aid offenders.

The campaign group Global Witness has been highly critical of the way hidden company ownership fuels corruption and hinders the fight against poverty and they welcome the announcement.

The UK’s Fraud Advisory Panel charity, of which I am a Trustee, warned of the abuse of company incorporation to commit financial crime and in 2012 recommended changes that included greater scrutiny of companies.

Making beneficial ownership of property transparent will not be welcomed by those who launder money or deliberately hide their wealth to avoid tax but it will be applauded by the victims who seek justice. The benefits do not end there. The data provides a new weapon in the arsenal for regulators and law enforcement that are looking for assets to seize from criminals; companies that launder money create unfair competition for rivals in their sector as they don’t have to work hard for customers, cutting off that funding stream levels the playing field; and lastly, adjusting the London property prices may mean our kids can afford a flat in town.

David Clarke is the former head of the City of London Police Fraud Squad, founder of the NFIB and a specialist in counter fraud and corruption at Today Advisory. He helped pioneer the AMLiss™ solution that mitigates money laundering risk in multilingual communication. To find out AMLiss™ can help you minimise risk see: http://www.todaytranslations.com/compliance-services-amliss/ 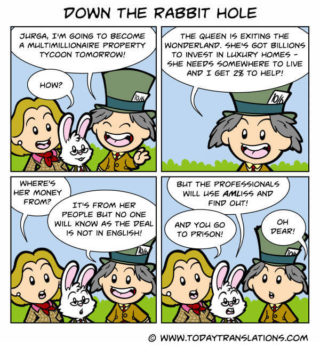