Alexander Thomas is Today Translations’ Subject Matter Expert on Energy Security Research, an Associate Member of the Energy Institute in London, and a graduate of University College, Durham.

Modern economies heavily rely on fossil fuels: natural gas, oil and coal. There are two crucial characteristics that put fossil fuels into a geopolitical context: firstly they are concentrated in relatively few regions in the world and secondly, they are non-renewable. 80% of the world’s known oil is located in nine countries representing 5% of the world’s population, while 80% of the world’s known gas resources are found in 13 countries (Sovacool, 2011, p. 21). According to Umbach, the Middle East alone possesses 62% of oil and 45% of proven gas reserves (Umbach, 2010, p. 1233). Countries such as Russia, Nigeria, Venezuela, and those in the Middle East have used their direct access to this fossil fuel as a vital resource for political ends. Natural gas pipelines and liquefied natural gas (LNG) terminals have also been used as a political tool. Researchers at Stanford University concluded that in every case they looked at, natural gas pipelines were prone to frequent contract interruptions due to price increases and gluts in the market (Hayes et al., 2006). In other words, in each of these countries’ legal and economic protections did not offset the inherent political risks with natural gas infrastructure (Sovacool, 2013, p. 12).

There are two perspectives that show the situation as a geopolitical one. Firstly, the majority of fossil fuels are located in regions of the world that are politically unstable. An example of this can be energy producing countries such as Sudan, Syria, Iraq, Libya and Iran, which have been described by the EU as countries sponsoring international terrorism. Iraq, Iran and Libya are known for their huge oil production, and Iran and Iraq in particular for holding 20% of the world’s proven oil reserves (Umbach, op. cit.). Secondly, internal political developments in fossil fuel producing states cause difficulties in gaining access to the resources. 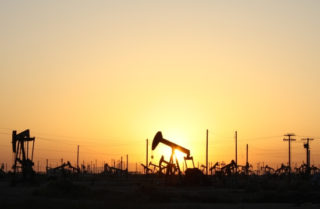 Russia has shown the potential for using energy as a geopolitical tool in the case of natural gas. Russia holds around 6% of the world’s oil and 23% of the world’s gas reserves (Umbach, op. cit.). Since the election of Vladimir Putin as President in 2000, it has been clearly recognised that ‘Russia has a growing ability and willingness to use energy as a political tool in order to pursue its political and geopolitical goals […and] strengthen its international position’ (Godzimirski, 2009, p. 176).

In the first days of 2009, a dispute between Russia and Ukraine led to the closure of major gas pipelines which ran through Ukraine to Poland, Czech Republic and Germany, leading to the worst dropout of natural gas supply in Europe to date (Pirani et al., 2009). This dispute left 18 countries affected, and those countries with limited reserves and no alternative supply routes were helpless in the face of the fierce winter. Initial cuts affected the supplies to Ukrainian consumption (January 1), while deliveries to Europe were reduced drastically on January 6 (for example, Italy experienced a loss of 25% of its national requirement and decided to increase imports from Libya, Norway, and The Netherlands; Hungarian consumption was cut by 40%). The impact was most severe in Central Europe (Scotti & Vedres, 2012). The countries that suffered the most were Bulgaria, which had to shut down its main industrial plants, and Slovakia, which went as far as to declare a state of emergency.

The aforementioned perspectives can be analysed in the model of ‘Regions and Empires’ by Aad Correljé and Coby van der Linde. The authors argue that the world is divided into countries and regions through the lenses of ideology, religion and political arguments, thus dividing the world into regions under the control of the EU, the US, Russia, and Asia. The main argument was that the world would become divided due to the lack of effective international markets, along with highly integrated energy companies working on a strong national basis. There is likely to be a slowly emerging [gas] supply gap as a result of lagging investments, particularly with regard to the North African suppliers, and the potential supplies in the Persian Gulf and the Caspian Sea region. A prime example of this global control regions phenomenon was the division of the UN Security Council during the war in Iraq in 2003. Diverging national interests drove the foreign policies of member countries during the sessions, motivated by energy issues. What defines this model is the way in which ‘main oil and gas producing and consuming countries or areas would manifest themselves, in the context of an increasingly tighter and more concentrated market for oil and gas’ (Correljé et al., 2006, p. 536).

The geopolitics of the various exporting energy regions influence the way the EU shapes its energy policies. Russia is a dominant player in the geopolitical game concerning the EU, as it is able to supply significant oil and gas exports to satisfy the EU demand. According to Correljé and van der Linde’s model, Russia is an ‘empire’ when it comes to exporting natural gas and the influence it can exert as a result.

Despite EU’s focus on the gas fields of Norway, the Netherlands and the UK, which can be reached within pipeline distance, and supplies from Qatar and Nigeria, which can be shipped to Europe by LNG tankers, the major energy imports are flowing from the large gas fields of Russia. The EU Member States are very much divided by different geopolitical interests when it comes to the supply of energy (Correljé et al., 2006).

Due to the fact that 90% of European gas imports cross several sovereign territories via pipelines, there are high political and commercial risks, which play a significant role in enhancing energy security concerns (Stern, 2002). Thus, as long as both the Community and the Member States believe in ‘cooperation in the field of energy rather than power grabbing, then the best security framework for the easy flow of energy supply in the EU can be guaranteed’ (Haghighi, 2008, p. 482). What Haghighi is trying to explain by the use of ‘power-grabbing’ is the tendency of the EU member states to narrowly pursue their national interests. Moreover, John Mitchell argues that there is no possibility for there to be a cohesive energy security on a national basis as the challenge for Europe is to ‘focus on energy policies in a European projection rather than to play games with old labels’ (Mitchell, 2000).

Russia plays an important role in shaping the EU’s energy security, as the EU heavily relies on Russian energy exports – ‘58 per cent of Russia’s oil exports and 88 per cent of its natural gas were destined for the EU in 2003’ (Haghighi, 2007, p. 342). According to Luong and Weinthal (2001, p. 394), ‘Russia earns significantly from its energy exports and uses that leverage to pursue energy development strategies that are politically rational, but not necessarily economically optimal.’ Russia is able to commit to such long-term strategies mainly through the fact that the natural gas market in the EU is dominated by pipeline transportation. Moreover, gas from Russia to the EU flows exclusively through the Russian state-owned energy company Gazprom’s pipelines (Goldthau, 2008, p. 689; Heinrich, 2008, p. 1544). The EU also has a vital interest. Haghighi believes that the EU, assuming it obtains good contractual terms, will have an interest to enhance Russia’s position as its gas supplier through investment and technology transfer which will also lead to the development of Russia as a secure and reliable supplier (Haghighi, 2007, p. 342).

Despite this favourable approach of the EU towards Russia, the interdependence of the two states is of a complex nature (Proedrou, 2007, 2010; Paillard, 2010; Kaveshnikov, 2010; Binhack and Tichy, 2012, p. 61). There is an argument that it is actually Russia that is more dependent on the EU market than the EU is dependent on Russian energy imports (Kratochvíl & Tichy, 2013), and that Russia is dependent both in terms of geography and finance (Binhack and Tichy, 2012, p. 61). In 2002 energy played an important role in terms of Russian export revenues, as it made up 55% of the total, which equalled to almost 20% of GDP. Summarising, the ‘overall EU-Russian energy relationship can be best explained as a framework of mutual interest and dependency’ (Johnson, 2005, p. 256).

The disaster at the Fukushima nuclear power plant and the associated limitations concerning nuclear energy development plans in several European countries, including Italy and Germany, gave hope to the Russian authorities that the energy situation may return to that of before 2008, when Gazprom was able to dictate the terms and conditions of cooperation with its European partners. Safety of energy supplies to Member States of the EU, and in particular to those which largely depend on imports of Russian oil and gas, will depend on the progress of establishing a single, competitive and free market of the EU, with access to various external and internal sources of supply.

The situation looks different when examining the individual dependence each member state on Russian gas. This varies accordingly to the energy mix of the given country and its strategy concerning the diversification of energy supply sources (Boussena & Locatelli, 2013). However, states try to keep in mind the importance of ‘the EU-Russian relationship as relations with Russia should be strengthened and reflect the economic and political importance and the already existing inter-dependence between the EU and Russia’ (CIEP, 2004, p. 17).

Despite an efficient energy-minded supranational organisation such as the EU, energy strategies cannot be dictated unless there is a consensus amongst the players and stability present in the sourcing region. This emphasizes the influence that geopolitics and politics have on energy-related issues, where energy is perceived by supplier states as a political tool, whilst for the EU an economic tool.

The current Ukraine crisis has reminded Europe of the pressing need to diversify its energy sources away from Russia. This can be achieved through better storage and interconnection as well as through better demand responses. In the medium-term, the development of LNG and shale gas along with renewable sourced generation and nuclear power prove to be a reliable way of diversifying energy supplies.

Diversification of energy supplies could involve one of the big LNG players – the USA. However, the choice of markets to sell US LNG will not only be dictated in terms of direct prices of gas, but also the cost of transportation of US LNG to Europe. Currently, European LNG prices are the highest in the world, and reliance on imports from the US could further increase these prices.

Although it would be inefficient for European companies to acquire LNG from the US, the possibility of other suppliers is extremely important for the Europe’s negotiations with Russia. If the European gas market becomes liberalised along with the creation of good gas connectors between countries, and the appropriate infrastructure is put in place, Europe will have a stronger position when negotiating prices with Russia.

Haghighi, S. (2008). Energy Security and the Division of Competences between the European Community and its Member States. European Law Journal 14 (4), pp. 461-482