We have a new name and a story to better reflect our heritage and our plans for the future. Please visit our new website www.guildhawk.com
Home Food Translations: Best and Wurst

Nothing exemplifies the staying power of the translation industry like food does. Short of owning a self-sufficient farm, even a monolingual person who has never left their country will ‘consume’ food translations on a daily basis. There hasn’t been another period of history where people’s dinner plates collate items from around the world as much as they do now. And this market sector is a very broad church – it spans from the legal minutiae of compliance in food label translations, to pleasure and entertainment in the booming markets for recipe books, cookery show formats and international tourism.

At a moment’s reflection, it is clear that food-related translations are among the most routine texts we ever engage with. But food, culture, geography and even economics are so inextricably bound to each other that accurately translating the names of simple things we eat is anything but routine; even for the most accomplished translator, it can be a daunting task.

The globalization of the production and distribution of food has been so thorough that it has in some ways made the translator’s task easier. Food terms are so culture specific that the normal method of translation, looking for the word with equivalent or near-equivalent meaning in the target language, is sometimes inapplicable by virtue of the fact that the item in question doesn’t exist in the target culture and language.

Sometimes an item’s international ubiquity makes translation painless. For instance, you’d have to machete your way through a lot of rainforest to find a group of people who don’t understand what ‘pizza’ is by now.

But most of the time, there is no simple answer – or even, a single ‘correct’ one. Take, for example, the food item ‘empanada’ from Spanish Latin America. These are small doughy parcels filled with a variety of meats or cheeses, and then baked or fried. Given that there is no direct equivalent of empanada, a translator can just leave it in italics to signify its foreign origin. Alternatively, it could do this and then supplement it with an explanation. And finally, the translator could render it as something else that is a rough approximation in the target language – for a British audience, we might use ‘cornish pasty’ or ‘Greggs pasty’ in this instance.

There are ups and downs to each option. In the first case, it is ideally transparent to keep the original term and to identify its foreign origin. However, this can elicit a variety of reactions, depending on the audience. The word ‘empanada’ might elicit knowing nods and anecdotes of hikes up Macchu Picchu from young foodie urbanites, but brows furrowed in confusion from the elderly, the rurally-based, and those with conservative tastes.

Adding an explanation to the original term, either in the text or as a footnote, has the benefit of avoiding all uncertainty. But texts are not just written to be informative; they are always written in a certain style with the aim of eliciting certain reactions. More tangibly for marketing purposes, they are also often written to fit within an online text box of non-negotiable size. Circuitous explanations can ruin the overarching style, or just be impractical in light of formatting restrictions. 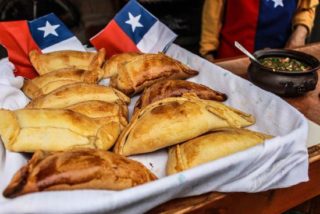 The third option of finding a culturally appropriate analogue in the target language is the kind of ‘eureka’ moment that makes translation so fun – but the elegance of the solution can often detract from the faithfulness of the translation. A baked empanada is quite a lot like a Cornish pasty, but if it is fried, the expectant customer who ordered it will probably be dismayed. Similarly, making reference to the cheap and cheerful bakery chain Greggs captures pretty well where the South American empanada fits into British culture – but it arguably goes too far the other way and misrepresents a fundamentally foreign item as being more familiar than it really is. In every case, the translator has to identify multiple workable solutions, and then to carefully weigh up which one is best suited to the purpose at hand – and that is no straightforward task.

The level of deliberation and cultural sensitivity that informs these decisions guarantees that good food translation is the preserve of human and professional service providers. These are lessons that businesses have largely taken on board. For instance, the tourism industry recognises that even if people go abroad their sense of adventure does not run that deep. Most tourists are much more likely part with their hard-earned cash if the offer of goods and services is made in their own language. Therefore the value of professional translation to the successful operation of any business involved with food and drink is inestimable.

Incidentally, Machine Translation only seems to be of use to such businesses if their aim is to have pictures of their menus ridiculed in compilation books in foreign countries. They say there’s no such thing as a free lunch, but perhaps in terms of translation the free lunch that you can get sounds pretty disgusting. From the infinite well of eyewateringly awful menu translations on the internet, I leave the following as illustration of the folly of skimping on food translation.

“Waiter, waiter, there’s a fly in my ‘Fatty cow in the United States in dad in sand in’”

Another prime reason why businesses are wise to invest in high quality translations for their food products and culinary services is that their target audience has never been so well informed. Gastro-mania has pervaded pop-culture, with food and cookery being very well represented in cinema and on television.

Either subtitled or dubbed, cookery shows are regularly exported to the four corners of the globe. Although the kind of caption one should write for Jamie Oliver shouting ‘pukka nosh!’ over a bowl of pasta is quite beyond me. Incidentally, Jamie Oliver was the man who introduced celebrity cheffery and Italian food to wider TV audiences in the UK. Nowadays, his books and TV shows on Italian food are translated and dubbed and sold and broadcast in Italy – proving, bizarrely, that taking coals to Newcastle might be a savvier business model than it has traditionally been given credit for. 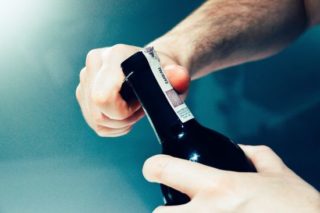 Cookbooks are among the most common kinds of food translation project – which is unsurprising given that thousands are published every year. Their popularity doesn’t make the task of translation any easier, though. For instance, ingredients that are staples in one part of the world are likely to be unheard of, or exorbitantly expensive, in another. Broadly speaking, the options are to substitute rare items for more common ones, or to keep the source as is and to provide glossaries with acceptable substitutes. One thing to bear in mind is that we don’t want our translations to date too quickly, and food trends are notoriously fickle. In living memory in England, garlic was a suspicious foreign item, and olive oil was sold by the fluid ounce at pharmacies as a remedy for earache. So in many cases it is wise for the long-term to risk introducing new words to our audiences in our translations rather than misleading them with substitutes.

Other problems presented by cookbook translation include finding names for cuts of meat that might not exist in other countries, the challenges of translating into round figures between the imperial and metric systems, and the existence (or otherwise) of culture-specific kitchen implements.

The Linguistics of Labelling

But translators don’t get to spend their lives just pondering these creative choices. The phrase ‘jack of all trades’ does them a real disservice, because in reality they have to be masters. Case in point is the serious legal responsibility of undertaking food translations, particularly with regards to labelling. The production and distribution of food is subject to extensive regulation in each and every country – be it information that you are obliged to put on labels, like nutritional values, allergens and expiry dates, to things you are prohibited from writing, such as the spurious health claims that companies love to make. Falling foul of any of these compliance issues can result in severe penalties. Expanding into new markets without specialised translators who understand each domestic food market is a business minefield that you’d do well to avoid.

Bear in mind, for instance, that if you plan to sell your product internationally, you will need to have separate labelling that complies with all the jurisdictions in which it is marketed. You may be subject to two different legal codes at once – for instance, food sold in England is subject to UK and EU law. There are restrictions on what you can legally call your food product – you’d best think twice about calling your empanada a Cornish pasty on the label to soothe the fears of your suspicious British customers, because the name is legally protected under an EU framework, as the Cornish Pasty Association is very happy to tell you.

Other examples of these restrictions abound. You’d be wrong to think that food manufacturers painstakingly calculate percentages of certain ingredients to print on labels because they enjoy it. It’s because if they don’t, they will get a brisk visit from a stern clipboard-wielding government inspector. The same goes for declarations about frozen, refrozen, defrosted, powdered, smoked, or concentrated items. If something goes wrong once, you’ll get a written slap on the wrist – but should the same fate befall you twice, you’ll be charged under the Food Safety Act 1990. And if your allergen information is incorrect, you’re liable under the Food Information Regulations of 2014 – for which the courts reserve the right to an unlimited fine, depending on the severity of the case. You must pay similar attention to your labels and all their translations if you make changes to the original recipe or if you change any supplier of any ingredient – firms that neglect to do so will end up fined and forced into a product recall – not just expensive, but embarrassing. Imagine the poor souls at Tesco’s marketing department tearing their hair out in the wake of the 2013 horsemeat scandal.

In sum, we eat the way we do today because quality food translation allows us to. It has opened up the hidden secrets of world cuisines, made tourists’ lives that much easier, and crucially enabled international trade in food to thrive under strict regulation. So it’s worth keeping in mind the array of talent and industry expertise that good translators can bring to your venture in this sector. In fact, without them, your goose is probably cooked.