This is the second blog by Today Translations Advisory Board Member and former military interpreter Duncan Brown. In this blog Duncan recalls a trip to Moldova.

Moldova – a curious country, smiley people, relatively poor, and you can drive livestock down the roads of the capital city, Chișinău. Sandwiched between the Ukraine and Romania it has its own problems: disentangling itself from the Soviet Union, becoming more open to foreigners, and attempting to boost its economy in many ways (more of that later).

As with many burgeoning democracies, the road was not a smooth one. A separatist movement grew in the Transnistria region, which split from Moldova proper after an armed argument. This region has been supported by the Russian government, with their troops located there as ‘peacekeepers’ based in the de facto capital Tiraspol. On the Moldovan side of this mostly unrecognised border there is a United Nations peacekeeping battalion and these two forces often interact with each other. The Russians ensure that the Transnistrian side do as they are told, most of the time. 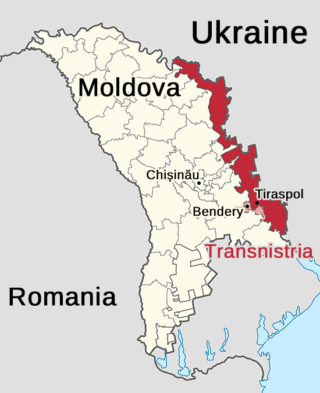 The city of Bendery, Moldova

My team and I went to Moldova to carry out arms inspections covering a large area of the country under the auspices of the Vienna Document 1999. As I’ve mentioned in the past, preparation for these inspections was key to easing any talks, and spotting possible slip ups and language hurdles. The main thrust of the inspection was to go to the disputed border area and receive briefings from representatives of the Russian General Staff in Moscow. My boss, ‘Lieutenant Colonel B.’, told me that he would ask to go to Tiraspol with the Russians. This was a question we always posed and we were always curious as to the mood and tone of the Russians’ answer – a sort of diplomatic ‘water tester’ if you like. However, we were very unlikely to go as the Moldovan escorts would never be allowed across the disputed border area.

In terms of preparation, this mission has always stood out as the most complicated. This ‘state within a state’ is not recognised by anyone except Russia, much like the Crimea region of Ukraine, so one has to tread carefully.

We arrived at the city of Bendery in the border area and pulled into the UN Battalion Headquarters to wait for the Russian General Staff representatives who were apparently travelling by train from Moscow to brief us.

While we were waiting, the Moldovan Chief of Staff decided to treat us to a briefing of his own about the whole of the history of the area. Despite the fact that before he launched into the briefing I told him that I was not a Simultaneous interpreter but a Consecutive interpreter*, it did not stop him from speaking like an auctioneer on steroids!

*Simultaneous interpreters speak at the same time as the principal, usually at conferences or long speeches. Consecutive interpreters wait for the principal to pause before interpreting for greater accuracy, and are more common in meetings and conversations.

I explained to Lieutenant Colonel B. that the officer was a member of the UN deep sea diving team because he took about two breaths in half an hour and I was following at break-neck speed! This was where the homework paid off for me, as I had revised beforehand and knew the background so was not badly shown up! To anyone who spoke neither Russian nor English, the briefing sounded like two horse racing commentators doing the same race in different languages.

Once we had finished, cramming the meaning of life into about 40 minutes, we retired outside (and at this point I was wishing I could retire as an interpreter as well!). Our Moldovan escorts informed us that the Russians were late.

The Bus in the Woods

When the word finally came through that the Russians were nearby we moved on to a very curious area: an old dilapidated bus by the side of a wooded road on the border. We finally met the representatives from Moscow with the head of the Russian Peacekeeping forces, a very short squat paratrooper (obviously he’d had too many landings with a rubbish parachute).

Introductions were made and the briefing was given, which I interpreted for my team. As with every briefing, it was full of official language and rhetoric with a plethora of questions and answers to and fro. As soon as the official meeting was over there was an audible chink of glass followed by the plop of a vodka stopper- you learn to recognise these sounds with practise! The Lt. Col. asked the big question and the Russians were amenable to take us but, as expected, the Transnistrians would not let the Moldovan escorts through so we stayed in the bus.

What followed can only be described as a social explosion as, despite the language barrier, we were all Servicemen without exception so the mentality was all the same. Vodka – discussions about solving the world’s problems – vodka – military ops – vodka – toast to all involved – sharing experiences – vodka and blinis – hopes for a peaceful world – vodka – discussions about where the best looking ladies were to be found (Voronezh, apparently) – vodka – Lt. Col. peeing against a tree – vodka – goodbyes with hugs and handshakes.

The problem with those sort of get-togethers is that there is only one of me and if none of the other team members speak Russian, you have to pace yourself and spread yourself pretty thin as sign language only goes so far!

On the way back to Chișinău we had to stop for a comfort break so we pulled in at a Barracks near some ranges and I ran into the most foul toilets I have ever encountered due to a distinct lack of running water for a whole Battalion! I will not put you off your food with a description but I vividly remember breathing through my mouth and still shudder at the memory! Almost as bad as emptying chemical toilets in Belize with an aftershave soaked pillow case on my head (but that’s a story for a different time)!

The following day we decided to go to the OSCE (Organization for Security and Co-operation in Europe) offices in Chișinău and by a complete fluke, I bumped into an old friend of mine on the street outside the offices. He was an American Major working for the OSCE on detachment from the US Defence Threat Reduction Agency (our US counterparts) and we had spent a lot of time together on courses and inspections. We received the same briefing in the offices here (in English this time, from the UK rep) that the Racing Commentator had given us the day before and out of habit I interpreted for my American friend in English!

On the final day of the Inspection we found ourselves driving around a massive cave system called Mileștii Mici which is home to one of, if not the, largest collection of wines in the world. We had to go in there as there is the distinct possibility that you can hide an Army, and its equipment – absolutely nothing to do with wine tasting or the promise of a champagne breakfast!

The lesson learned from this mission was that background study and preparation pay off, and if I had not done the relevant research, I would have made it whole lot harder for myself.

I still haven’t forgiven the briefing officer either and can still remember the look of amusement on my Boss’s face as he rattled on!

There was also the need to study the military policies and politics of the countries visited as you needed the background knowledge to understand the answers given to the complex questions we posed during the inspection.

As my old Corps motto says – Knowledge gives Strength to the Arm.