On the 23rd of March, I had the pleasure of attending the awards ceremony for the Shell LiveWIRE Young Entrepreneur of the Year 2015.

Shell LiveWIRE is an inspirational organization whose mission is to promote the innovative talents of young entrepreneurs in the UK. The scheme has real pedigree, having started back in 1982. In the three and a half decades since, an astonishing number of people have benefited from their initiatives. By their own count, as many as 880,000 young people have received advice and guidance on embarking on their entrepreneurial careers, and over £5 million in funding has been awarded. I myself was a finalist in this competition, and Shell’s endorsement helped me and my business to go from strength to strength afterwards.

True entrepreneurs are problem solvers at heart, and so Shell’s support for those who have the wits and courage to tackle real-world issues is laudable. In particular, Shell LiveWIRE offer support to those bright young minds that have focused their efforts on finding solutions to the serious sustainability challenges that our planet faces today. Innovative thinking is always wonderful, but the pressure now is for our innovations to be wise with their future consumption of resources, or to address existing inefficiencies in the technology we already have. These six had all won a Shell LiveWIRE monthly award in 2015, with £5,000 awarded to each in prize money. 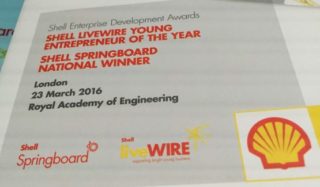 I had judged the semi-final round, and so to meet the finalists about whose ideas I had read so much was greatly rewarding. The field this year was impressively strong. The range of products vying for the grand prize spoke of a group of young people who had prospered by thinking outside the box. We had Filamentive’s environmentally sound approach to 3D printing materials, to UniGreenScheme’s circular economy for tackling wastefulness in the university market for scientific equipment. There were also two young men putting to wonderful use the same undervalued resource: insects. At EdibleBugFarm, Adam Routledge’s dream is to address food security with human grade edible insects as a more efficient alternative to mainstream protein sources. Similarly, Matthew McClaren’s Entomics start-up harnesses insects and leftover food waste to produce valuable compounds like fuels, feeds, and fertilizers with cross-industry applications. These are all ideas with great transformative capacity.

Worthy of special attention is Design By Sol, the brainchild of Solveiga Pakštaitė, who was the winner of the Shell Staff Inspiration Award. The product which took her to Shell LiveWIRE’s awards is the Bump Mark, a bio-reactive food labelling system. Using gelatine that is calibrated to degrade at the same rate as a range of foods, the Bump Mark label degrades to reveal a bumpy, tactile surface, which lets users know when their food has gone off. This addresses the issue of food wastage, as consumers and supermarkets alike prematurely throw away a terrible amount of food every day that could have been saved.

However, the man of the moment was Tom Robinson, Managing Director of Adaptavate, who won the top prize of £25,000 in funding. The product in question, named Breathaboard, is a high-performing and environmentally-friendly alternative to plasterboard. This construction material is made out of renewable crop-wastage and has a range of valuable properties that better its competitor, from flame-resistance, to superior thermal and acoustic insulation, to moisture regulation which prevents mould growth and all its associated health problems.

So, congratulations are due to Tom, as the new Young Entrepreneur of the Year. However, this is still just the beginning. All those who made it to this stage have the capacity, personality, and grounding to progress to greater heights in business. It was wonderful to be present in a room buzzing with so many fresh ideas and so much energy directed to finding the solutions to grave problems. These young entrepreneurs merit recognition for realising their dreams for the greater good, and I firmly believe that they are all set to enjoy bright futures.

Stay tuned as we plan to feature Tom, Solveiga and Adam on the Today Translations blog in the coming weeks.