There are over two million students studying at the UK’s 164 higher education institutions of which around 1.75 million are undergraduates. With a third of all UK higher education providers having an annual income of up to £100 million,1 and two thirds of providers with annual incomes above £100 million , this is an industry of considerable strategic importance to the British economy. This is a fact that will have still greater significance in a post-Brexit context of a highly competitive and globalised world economy.

Whilst the UK can still claim to have some of the world’s leading universities, not all is well in our higher education sector. A number of recent articles in the UK press have raised concerns about a current trend in our universities (said to originate in the USA), whereby students choose to shelter themselves from difficult or controversial issues or viewpoints; the very lifeblood of university life, one might assume. Most recently Oxford University Vice Chancellor Louise Richardson has come in for criticism from her own student bodies after reportedly claiming that students have complained to her about not feeling comfortable about sharing a class with a tutor who was less than supportive of homosexuality. Richardson said that she tells students “I’m sorry but my job is not to make you feel comfortable”, if you don’t agree with the views you hear you should question and challenge them.2

That a university vice chancellor should feel the need to state something so obvious is an ominous sign for the intellectual development of our coming generations. This worrying phenomenon has been picked up by other commentators, such as Brendan O’Neill writing in the Spectator. “Our own student leaders assume their peers are morally feeble and must be protected from sore words or controversy. But in the US, they have gone deeper. Campus authoritarianism is darker, more driven by race. It governs not only ideology and opinion, but everyday conversation and even dress.”3 As if the fact that our students are becoming morally and ideologically enfeebled isn’t a big enough worry, other UK academics have been raising concerns about the basic educational ability of our undergraduate students. Writing in the Daily Telegraph, Tibor Fischer, novelist and sometime university lecturer, commented “When I tell people who have had nothing to do with universities recently that I’ve taught British undergraduates who are simply incapable of writing a correct sentence in English, most smirk in disbelief.”4 And yet Fischer’s experience is all too real to me. Having taught in an old London Polytechnic (re-invented as a university), for seven years now, I have seen all too many students who struggle to write anything comprehensible in English, or to read even the shortest most elementary article and decipher the content. With government pursuing a policy of making more and more blue-collar occupations all-graduate (teaching, nursing, policing), this trend is likely to get worse rather than better. 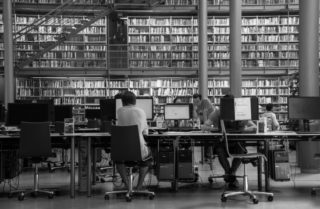 There are threats too from our global competitors. The highly-respected OECD PISA assessments5 (Programme for International Student Assessment), show that although the UK performs above the OECD average in science, it is outperformed by Singapore, China, Hong Kong, Taiwan, Japan, Vietnam and Korea; all countries with a far more disciplined and traditional approach to teaching and learning and scant interest in safe-spaces and avoiding emotionally disturbing issues. There is though, another trend developing that may unshackle both students and tutors from political obscurantism and lead to a creative destruction in university campuses. With undergraduate student tuition fees increasing to £9,250 the attractiveness of full-time study for many British students must start to diminish. Instead, more and more students are likely to opt for part-time study that allows them to work in paid employment and live at home, or wherever it is cheapest for them to do so. The future could be in the development of virtual campuses, that save money for universities by allowing them to sell expensive fixed campus buildings, jettison the army of backroom and support staff and appeal to students across the globe, many of whom would not normally be able to contemplate moving to Britain to study; either because of the financial burden, the visa regime, or the simple practicalities of leaving home and family to study abroad.