The 2016 Web Globalization Report Card has been released, and it provides a fascinating analysis of today’s trends in global web content.

Written by John Yuncker of Byte Level Research, this is a publication that comes with real authority.

For each of the last 12 years, the report has compiled data from a vast range of globally optimized websites, with the aim of addressing the queries of marketing strategists who wrestle with their constantly shapeshifting target. As well as ranking the most exemplary showings among global websites, the report also analyses the trends in mobile platform optimization and the most common mistakes in localization. The ramifications of this report’s conclusions on the optimal language configurations for international websites are, if not startling, at very least worthy of our attention.

The overarching conclusion is that market-leading companies are increasingly conscious of the blooming business importance of the non-anglophone web, and are setting new standards in the internationalization of their content and services. None of which is to diminish the importance of English language platforms – it’s simply that 2016’s web users expect tailored services, and to succeed in a global market you have to provide them all at once.

The standout statistic relates to the proliferation of Chinese on the internet. In 2006, only about 6/10 (65%) of global brand leaders had Chinese language provision on their websites. Fast-forward a decade, and it is nearly ubiquitous, at 97%. That Chinese has effectively caught up with English is a reflection of the global shift that has taken place in the intervening years and the way this has reshaped the business priorities of e-commerce giants. 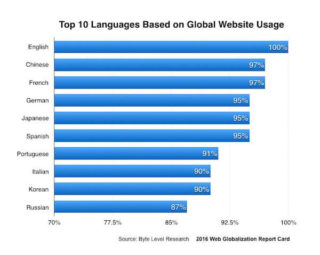 As the equally strong prevalence of French (97%), followed by German, Japanese and Spanish(all 95%) shows, these languages may have been leapfrogged but their importance has not been diminished. The consequence of growth is that companies must adapt to excelling on multiple fronts simultaneously.

There are other stories of meteoric rises in online visibility over the past decade. Take, for instance, the Russian language. In 2006, 42% of global websites had Russian domains. This figure has shot up to 87% in 2016. This renewed focus on Russian localization has seen some stellar success stories.

Nonetheless, the online language playing field has still not levelled out. Some languages are disproportionately represented to the detriment of others. Chief among these language gaps is the case of Arabic. While it is spoken by nearly 250 million people across a vast swathe of the world, only half of all global websites support it. Yuncker offers the bizarre case of the Egyptian Apple store being entirely in English – despite Apple’s OS itself being able to support Arabic! There is, though, another side of the coin to this underrepresentation. By all accounts, Arabic is seeing the fastest acceleration of growth in its online presence out of all the languages, and we can expect significant changes to come in this space in the coming decade.

Another interesting case is that of Hindi. While it has even more native speakers that Arabic at 260 million, it’s covered by only 4% of global websites. The reasons for this disparity are complex – Arabic is spoken in many countries, and is a prestige language in its own right, whereas Hindi is mainly spoken in one country (albeit a massive one) where companies have tended to bank on the public’s proficiency in a single colonial language. Nonetheless, the trends suggest that this attitude of cutting corners by eschewing Hindi might be an outdated one. Recently tech giants of the calibre of Facebook, Google and Twitter have made the effort to accommodate Hindi as well as several of the other languages of the Indian subcontinent, and their actions should set the example for others.

These findings are in line with other influential research produced in recent years. Common Sense Advisory, an independent market research group focusing on the Language Service industry, has made prescient projections about the efforts firms will have to make in the coming years to reach their target demographics across borders. 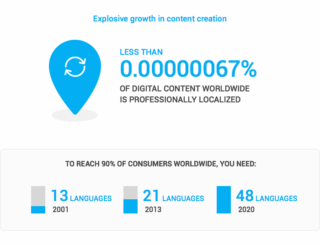 The vital lesson to take home is that the expectations of the online public are higher than ever, and are only set to continue along this path. Those who ignore these multilingual movements risk being left behind – but on a positive note, Translation and Localization are the great enablers of international growth, and the quality of the services has never been so impressive.