On the evening of February 22nd, Martin Jacques gave his talk entitled “When China Rules the World” at the National Liberal Club in London. The title, lifted from his newly expanded book which has sold 350,000 copies in 14 languages, is crafted to alarm Western sensibilities; not ‘if’, but ‘when’. China’s rise is far from over, but its hegemony is already considered a foregone conclusion.

The basic facts of China’s ascendancy are indeed unique in our experience of history. The USA is the benchmark of what a modern superpower looks like, and even in 1980, the USA’s economy was over twenty times the size of China’s. Yet somehow, the IMF predicts that by 2020, China’s economy will be 20% bigger than its nearest rival. Every single country in the world has had to reconsider its relationship with China in the last 25 years. To illustrate this we need only glance at Jacques’ illustration of China’s grasp on world trade today, where red signifies that China is the country’s largest trading partner, orange second-largest, and yellow third or below.

If it continues the current growth of 7% until the end of the decade and sustains 6% over the 2020s, China is projected to account for 34% of the world’s economy by 2030 – bigger than the projections for the US and the EU combined (28%). This represents a very different mental map of our world to the one with which we currently work.

These epoch-defining figures are bound to provoke soul-searching on both sides, but Jacques presents his numbers with reserve. The incomparable nature of the beast means that economic precision is a pipe dream. Even the UK, he points out, has immense difficulty in estimating its GDP. How can we expect such a diverse entity containing 1/5 of the world’s population to be more lucidly defined?

The only thing we can be sure of is that the potential for more is waiting to be realized. China is characterized as a land that escapes neat summary. Despite all their development, just shy of half the population still lives in the countryside. And much of the growth to this date has been achieved by massive investment in infrastructure, which cannot continue at the same rate without overproduction. Their economy is in the process of undergoing an enormous structural change – as Vince Cable puts it, “China is becoming middle class” with vast leaps in life expectancy, literacy, and standards of living, and the leaders recalibrating its economy to become more consumer-focused are “trying to quickly turn around an oil tanker in a very small harbour.”

Jacques’ most incisive comments come on the subject of the West’s default position of scepticism. Our scepticism that such unprecedented growth can be sustained in a place perceived as ‘backwards’. Our scepticism that China’s style of political governance is even legitimate. And our scepticism that China represents a new modernity. He argues that our belief that the only logical conclusion of modernization is westernization – “the idea that we’re all on different steps of the same escalator” – is deeply flawed. Even if their mentality is pragmatic in its willingness to learn and adapt from Western cultures, nothing can make China resemble our societies in any fundamental way. This is because it is not possible to conceive of China as a nation-state like our own. We think in these terms because, in the Western experience, our identity derives from the sense of our nations’ recent histories. This is not so for China. The history of the nation over the last century is less relevant compared to the bigger picture – the sinuous tapestry of their 2,000-year history. What it means to be Chinese is a function of being a ‘civilization-state’. This concept is central to Jacques’ argument, and he presents the idea with Lucian Pye’s lapidary quote:

‘China is a civilisation, masquerading as a nation state, obliged by its weakness at the end of the 19th century to adapt to European norms.’

If China is not, as Jacques claims, a conventional nation, but a sub-system in its own right, what cultural factors account for its extraordinary longevity? There have certainly been peaks and troughs. The period prior to the revolution of 1949 was one of utter humiliation and disunity – Jacques goes so far as to use the term ‘Balkanization’. Yet in the second half of the 20th century, the values of unity, stability and order were thoroughly ingrained in the cultural psyche. This was an act of picking up lost historical threads. Jacques stresses the importance of meritocracy and particularly competence in Chinese culture, qualities which first came to the fore 1,700 years ago when the Tang dynasty opened the imperial state exams to commoners. He wishes to dispel any suggestion that China is simply ‘lucky’; the people in charge are highly competent because their society is geared to make them so. Jacques makes little effort to hide his Sinophilia when he says “We have to learn statecraft from China”. But perhaps we should be willing given how much China has learnt from us.

The importance of the Chinese phenomenon is not just a matter of facts and figures about trade surpluses and per capita GDP. The pressing question both for the west and China itself is a more intangible one: if China is to rule the world, what kind of ruler will it be? A takeaway point from Jacques’ talk is the warning not to project our own values or history onto Chinese development in the search for an answer. History suggests that the Chinese notion of their place in the world is very different to our own, and so he claims it is unlikely China will ever have expansionist, colonial ambitions. It is telling that the typical reaction of Chinese people to the book’s title is, according to its author, one of exasperation – “But we don’t want to rule the world!” What they will still seek to develop is greater political clout, for which great economic power is a necessary but not a sufficient prerequisite. We should expect the international system to become increasingly geared towards Chinese power, but in a subtler way than some might think. “America is the architect and landlord of the international system. China is a tenant. Their relationships to it are different.” He predicts no cataclysmic upheaval because it is the same international system that has allowed China to flourish. Odd though it may sound given their 20th-century history, Jacques is insistent that “the Chinese view of change is not revolutionary, but evolutionary.” 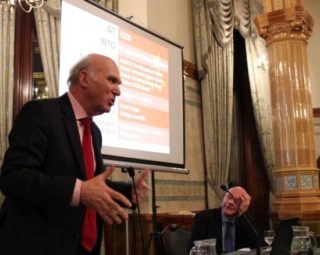 While China has traditionally been quite inward-looking, we are now living through the most externalizing period in China’s long history. The stand-out example of their modern initiative is that of the Asian Infrastructure Investment Bank (AIIB). This was China’s first ever multilateral initiative, aimed at increasing the regional autonomy of the Asian financial world and pulling up the rest of this developing region via the same investment methods that powered China’s boom. China had expected 22 Asian countries to sign up. Instead, they had 57 signatories, with a further 30 waiting to join. Most strikingly, Western powers such as Britain, Germany, Australia and Italy have all signed up, much to the exasperation of the USA and Japan, who both remain aloof. This is a sign of both astute tactics for Britain et al, and of a seismic change. America is now obliged to come to terms with China in a relationship of parity, rather than superiority.

Perhaps Jacques’ call to soften all scepticism is not particularly desirable. China’s industrial ascendancy coincides with the world on the verge of ecological disaster. Many of the freedoms that we cherish in the West are not necessarily held in the same high esteem by the government there, and the overall human rights record is questionable. Nonetheless, the signs are clear that the West will be wise to pursue a more mature relationship with China in the coming years. China’s growth means the world is looking increasingly multipolar, and our business interests need to diversify accordingly if they want to prosper. Leaving behind a Western-centric view means adapting culturally too, and that is where the future is bright for companies like Today Translations. With such an emphasis placed on the language and customs of cultures around the world, the efficiency of international trade and communication, particularly in Chinese, will become the sink-or-swim issue. While localisation is still a specialised term, for now, it might just be the word on everybody’s lips soon.