We have a new name and a story to better reflect our heritage and our plans for the future. Please visit our new website www.guildhawk.com
Home “The world needs better leaders – that’s why I’m following Monty.”

There I was, addressing 500 Lithuanian business leaders, sharing my unorthodox views on the role of those at the helm of companies. Are my views so unorthodox? They are. However, they hark back to another era, and that is what I wanted to impress.

After being included in the list of Top 100 Women in Lithuania, I was invited by the business journal Verslo Žinios, respected for its independence, to speak at their conference. As a British-Lithuanian with operations in the UK, Europe, and beyond, I was honoured to be back home.

How pleased I was to see so many in attendance asking challenging questions that most seasoned business people struggled to answer.

Yes, Lithuania is ready for business. For a small country, it produced many great leaders, scientists and artists. To mention a few: former Mayor of Bogota Antantas Mockus, who transformed the capital of crime into a flourishing city, traces his origins to Lithuania. The legendary Al Jolson, star of the silver screen and the first ever talking movie, was born near Kaunas. Sir John Gielgud, who dominated the British Stage for nearly eight decades, and Sir Montague Burton who built the Burton business empire, are both sons of Kaunas, my birthplace.

Throughout history, Europe, Lithuania included, have experienced periods of exodus as young and old alike disembark on epic journeys in search of a better life. Al Jolson, born Asa Yoelson, and Sir Montague Burton, born Meshe David Osinsky and affectionately known to millions as Monty, were brave young adventurers when they left Lithuania.

Those were tough times for people, and hunger, the prospect of a good job and security are powerful drivers for humans. What Al and Monty created in their lives amounted to nothing short of a miracle, not simply for them, but also for the millions of hearts and minds they warmed and inspired during their lives and long after their journey to the ‘anapilin’ (‘the other side’).

To find out how and why Monty has inspired my leadership style, below is the transcript of my speech, translated from Lithuanian:

Now, why on earth am I here speaking to you? Why am I different to all these people you’ve been hearing from?

I thought if you are performing at the enormous, marvellous O2 Arena, you shouldn’t have to introduce yourself. I’m a little bit like him: I must introduce myself because I’m not the Electric Light Orchestra or Justin Bieber or anybody else.

So, for those who don’t know me, I’m a Lithuanian. I was born in Kaunas in 1976 and I’ve been an entrepreneur since I was a little girl. I founded a profitable, technology-driven, multinational organisation that provides regular work training and mentoring for thousands of people across the world. A little bit like the Electric Light Orchestra but you probably haven’t heard of me.

I will come back with some hard statistics about my success, my company and what we’ve enjoyed in a minute. However, let me be clear: I believe that success is measured by the good you did in life, and that is only known after you’re gone.

Success is measured by the good you did in life, and that is only known after you’re gone.

I would like to tell you what I believe, is the secret to a rewarding business career and life. However, before we get there can I just ask you for a bit of audience participation rather than me speaking?

You’re all in business, and probably have varying degrees of success, or maybe you’re just starting out. Please think very carefully about one person you really admire, someone you admire in business.

Have you got somebody? Now, what is it about them you admire most? Think about it.

Now, think about someone you don’t like in business; what is it you don’t like about them? Maybe, how they operate? Maybe they did something you didn’t like.

I admire lots of people in business, however, I always think about Sir Montague Burton.

He was one of our countrymen, he was Lithuanian. Born in Kaunas in 1885, he left our country at the age of 14 to go to Great Britain. You could say I was following him.

He started a tailoring company, making men’s suits – beautiful clothing. That company grew to be one of the largest, most successful, advanced tailoring businesses in the world.

I admire him for rising above real hardship, real difficulty. Travelling to Britain as a young man in the 1890s and changing an entire industry. He made employees’ lives, the lives of all his staff, much better in the Tailoring industry.

He is an example of the entrepreneurial DNA, the spirit that Lithuanians have for business: doing great things, having great vision, even when they faced with real hardships.

A person I don’t admire, someone who was admired by powerful people once upon a time, is the British fashion tycoon Sir Philip Green.

He is the leader of the Arcadia Group, a big corporation that included the empire built by Sir Montague Burton. However, under Sir Philip Green’s leadership, one of the group’s largest companies collapsed, leaving taxpayers to fund staff, pensions, and thousands of jobs were lost.

In my mind, Sir Montague and Sir Philip are the two faces of business. Both want growth – we all want growth. However, one puts the society before self-interest and the other doesn’t. The other put self-interest before society.

I want to be someone in Sir Montague’s world, where we grow business and put society before self-interest. Growing, making opportunities for people, for the long-term.

With that power, and some people forget this, comes responsibility—the responsibility to make society function better. When you act responsibly, and treat people with respect, and here is the great thing, they respect you back. That’s a fact, and it’s wonderful.

When you respect people they work harder for you, they become loyal clients, they become friends, they even become like family. And that is also why you can only be judged as a success long after you leave your business behind.

Now, you might think I’m being frivolous—Let me quash that thought. Here are some facts that will show that respect for your team and your clients, especially your supply chain, makes your business far more efficient, effective, prosperous and sustainable than one that just chases profits. Far better than a business that doesn’t invest in people, and rewards people when they shouldn’t be rewarded.

My company, Today Translations, is very unusual. We are classified as a “gazelle,” but what does this mean in business? It means that we have been growing at a rate of over 20% a year for the past 4 years. Moreover, our growth is organic and profitable.

Why is this unusual? I’ll tell you why with five statistics about British businesses. Out of 2.7 million companies in the UK, we are in the:

I’ll tell you something else I’m very proud of: the loyalty and skill of the people in my team; the project managers, the linguist, the computer coders, the copywriters, the lawyers, the researchers.

They all are the best in the world. Fact. Not just because of their qualifications, however, because of two things that mean everything to me:

Two, they all share our company’s values, which are: dynamism, collaboration and trust.

Dynamism, being adaptable and innovative; collaborating with clients and everybody else to make success; trusting each other. 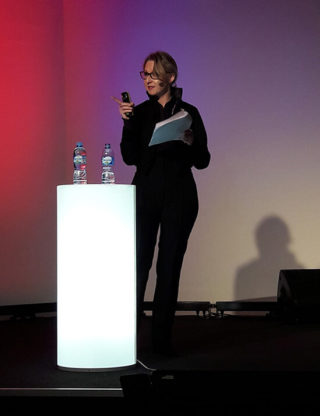 Why is this important to me?

Because I believe that you, and my team, deserve one thing: a great life. We’re only here once. We only go into business to make it a success; nobody goes into this for failure. I want you to have both a great life and a great business.

Advisors will often tell you: “Oh, step back from the business. Selfishly pursue business goals. Don’t be too involved in day-to-day operations – you don’t need to know how it all works. Why are you getting into coding? Why do you want to know about legal? Or how we make this? It’s not your area.”

I tried that for a little while; to distance myself from the operations, not being the face of a business. You can do that very easily when you travel a lot, you can distance yourself from your business, and leave it to others.

What happened? We stalled! The gazelle was no longer jumping.

However, when I dismissed those advisors and went with my heart, investing in my people, trusting them to deliver – not being on their back all the time asking “what are you doing?” and so on. Instead, being ever present, and knowing exactly what we are doing: “leading.” Then we became one of the most productive and fastest growing companies, and have been for the last 4 years.

We have a lot of challenges coming up, and that’s why we mustn’t change. I want more young people to succeed in business, and enjoy life like I do.

I want to highlight only three things:

Successful leadership is measured by the good that you do, which we use to demonstrate values that are important to us.

Putting society before self-interest in business means your positive impact will be felt far beyond your day-to-day of work. It will have a much greater impact on many more people.

Recruit people with passion and skill, support them every step of the way, and above all trust them.